You are here: Home1 / About the Program2 / GENERAL CONSULTATIONS3 / Anatomy of a Radial Tear

Classification and Causation of Annular Fissures

in the Human Spine 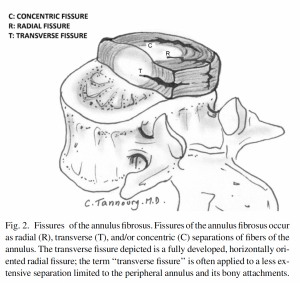 The focus of this article is on the categorization of annular fissures in the intervertebral disc. Now the historical change is really in the vocabulary. The research is showing, now that they’re referred to as FISSURES and not TEARS, tears would typically give indication of causation or etiology and because not all tears are caused by trauma, not all annular fissures are caused by trauma. We see now, there’s a better method of categorization. This diagram is a really great example of the three main types of annular fissures in the intervertebral disc. The acronym is easy to remember, it’s just C-R-T.  “C” standing for Concentric Fissure or perhaps you have heard it called, Circumferential. “R” stands for Radial and “T” for Transverse.

Additionally, something to keep in mind, a few papers out there refer to annular fissures as an annular “rent”. If you see the term RENT on an MRI report, it means the same thing, the older school vocabulary was tear, but now it’s FISSURE.  Remember, concentric or circumferential is a separation of the laminate in a circular format around the disc in a circular pattern. That’s typically due to degeneration and would result in the nucleus pulposus pushing outward on a weekend annulus which is going to give us a bulge. The Radial Fissure is a tear across or though the lamina of the annulus.  Which is going to connect the nucleus pulposus to the outer rings of the annulus by creating a channel pathway for that nuclear material.   Based on the degree of the radial fissure, it would result in a disc protrusion, extrusion, or a sequestered fragment.

Lastly, “T” stands for transverse, which is more of a horizontal type of FISSURE which is a more of a hollowing out of the intervertebral disc. A great analogy that was taught to me by a spine surgeon was typically the transverse fissure is like a bubble in a pizza crust.  When you pick at the top of it, you realize that underneath the surface it is all hollowed out.  That type of fissure is very much related to advanced degenerative disc disease and often results in a fusion since there is no structural integrity left within that particular disc.

When it comes to morphology (appearance) there are many descriptive terms applied to the intervertebral disc, this is just as true for the annular fissures. However, that is just for describing the appearance, not HOW it happened.  When looking at that aspect we are concerned with the “action” that occurred to produce that specific morphology (appearance) as presented above.  That is called “etiology” which is defined as “the cause, set of causes, or manner of causation of a disease or condition.”  When describing causation, we have two choices relating to the intervertebral disc, traumatic or degenerative, that is it. We can keep it simple and to the point.  When looking at etiology and annular fissures, it is the radial tear that is traumatic with all others being caused by the progression of the degenerative process.